Dean Hodge reviews some of the acts from this year’s DimSŵn Festival in Cardiff , 9 April. (Photography by Nick Evans)

If its older sibling Sŵn is the headline act of the festival season, then the younger DimSŵn is the inaugural support whetting aural appetites for the soundtrack to our year ahead. With the tenth year of Sŵn approaching, DimSŵn was in some ways a premature nine-and-a-half old birthday celebration – a mere slice of the Sŵn birthday cake full of the rich sonic filling and rare flavours-of-the-month that this defiantly Welsh institution never fails to mix up.

As is often the case at Sŵn, it falls on the slim guitar-adorned shoulders of a singer-songwriter act to open proceedings. So DimSŵn 2016 gets under way in Undertone with Merthyr Tydfil chanteuse Bryony Sier – the first in a line of acts representing the Forte Project stage. She manages to inject a unique edge into the country and folk genre with a voice that sounds more Memphis than Merthyr, and melodies cut straight from the heart. END_OF_DOCUMENT_TOKEN_TO_BE_REPLACED

Dean Hodge speaks to Dion Hamer from CaStLeS (Cestyll) – one of this year’s Horizons/Gorwelion 2016 artists.

When listening to garage-psych trio CaStLeS (or Cestyll in Welsh), you only have to close your eyes and you can convince yourself that you’re back in the 60’s again. Their staunchly authentic sound is a kaleidoscopic blend of psych-infused surf-rock and West Coast influenced guitar-pop, filtered through a late 60’s lens.

The North Wales band have been meticulously honing their distinct style while managing to exist fairly underneath the radar for a while now. But while the ‘sound’ is one thing, are the ‘songs’ good enough? Recent singles like PartDepart and Foresteering are strong hints at a band who have belief in their craftsmanship, and are ready to emerge from the shadow.

Dean Hodge spoke to CaStLeS member Dion Hamer about the band being selected for the Horizons/Gorwelion 2016 scheme, their ambitions for the year ahead, and their two upcoming albums. END_OF_DOCUMENT_TOKEN_TO_BE_REPLACED

Dean Hodge speaks to Alfie Cattell from Anelog – one of this year’s Horizons/Gorwelion 2016 artists. 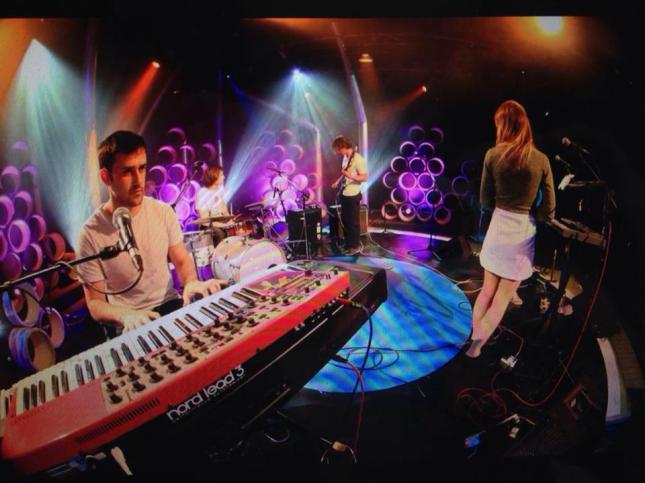 North Wales psych-folk outfit ANELOG is essentially the collaboration between two families – both for whom music runs in their blood and harmonies exude from their soul. The Cattell brothers – Danny on vocals/guitar, Sam on bass and Alfie on keys/synths – make up one half, while Rogers siblings Lois (vocals/synths) and Sion (drums) complete the other.

The sound that arises from this family affair is one that is bathed in roaming folk melodies, psychedelia-tinged hooks and vocals that are almost telepathic in the harmonies they manage to create. When the band manage to make this intoxicating blend work, it really works.

Member Alfie Cattell took time out from one of their rehearsals last month to speak to Dean Hodge – touching on the band being chosen for the Horizons/Gorwelion 2016 scheme, their ambitious plans for their debut album, and the big radio break that marked the formation of the band. END_OF_DOCUMENT_TOKEN_TO_BE_REPLACED

Dean Hodge speaks to Iolo Jones, the singer/guitarist for Ysgol Sul – one of this year’s Horizons/Gorwelion artists.

Llandeilo trio Ysgol Sul’s rapid rise – from Maes B ‘Battle of the Bands’ winners two years ago, to one of this year’s Horizons/Gorwelion artists –  is a sharp contrast to their decidedly laid-back, sombre ‘dream-indie’ sound.

The band’s name directly translates from Welsh as ‘Sunday school’. Their music could aptly soundtrack a hazy Sunday afternoon in the dim-lit sunshine retreating from the daily grind of work or from one pint too many the night before. Behind the deceivingly easy-going façade of their music though is a darkly psychedelic edge, lent further mystery by the Welsh-language vocals.

Throw in the jangly guitars of bands like Ride and Cocteau Twins plus the edgy power-pop of The Pixies – and what you get is a sound that offers a sampling of pure escapism bottled into one sonic vial. To find out more about the band, Dean Hodge spoke to singer/guitarist Iolo Jones. END_OF_DOCUMENT_TOKEN_TO_BE_REPLACED